NEU in the new era of Philippines-Russia diplomatic relations 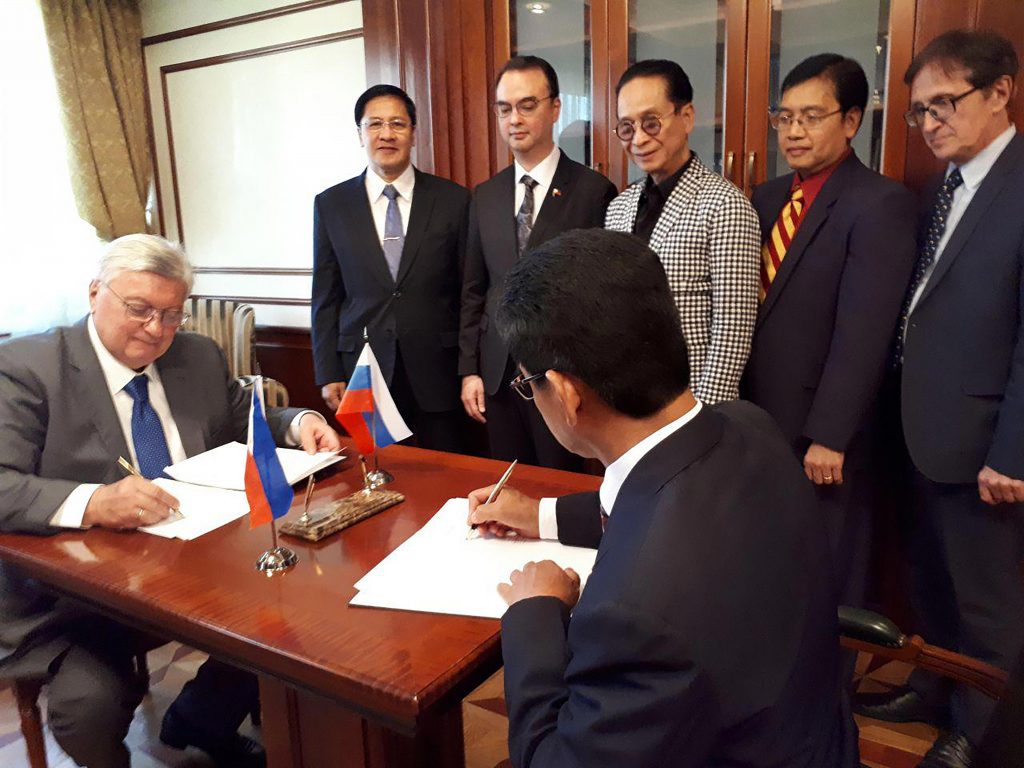 MILESTONE. Witnessed by the delegates of the Philippine government, the representatives of New Era University and Moscow State Institute for International Relations sign the Memorandum of Understanding on May 14, 2018.
(Image Source: Eagle News Service)

“We are undertaking a working visit to Russia as part of our efforts to build on stronger and mutually beneficial ties with the Russian people…The visit is in line with President Duterte’s commitment towards an independent foreign policy that is centered on the needs and aspirations of the Filipino… I am pleased to note the significant accomplishments the past year showing that our relations with Russia have grown by leaps and bounds.”

This was the optimistic appraisal of the then Department of Foreign Affairs Secretary, Hon. Alan Peter Cayetano, during his visit to Moscow, Russia in May 2018 as Philippines fortified its ties with Russia. Cayetano further noted the high-level engagements between our officials which helped translate the understanding between our leaders into concrete plans and programs. There have been less engagements between the Russian Federation and the Republic of the Philippines since the former’s establishment in 1991 following the collapse of the Soviet Union. However, recent events showed the deep desire between the two countries to foster diplomatic ties.

As the new era of diplomatic relations between two countries flourishes, New Era University (NEU) plays a significant role in strengthening Phl-Russian relations. In 2016, NEU through its ASEAN Studies Center (ASC) embarked on an academic collaboration with Russian universities as ASC director Dr. Carlos Tabunda Jr. represented NEU at the ASEAN–Russia University Forum in Vladivostok, Russia. A roundtable discussion on the bilateral and multilateral relations between Russia and the ASEAN was held at the NEU main campus in Quezon City, Philippines in November 2016.  Dr. Ekaterina Koldunova, Deputy Dean at School of Political Affairs of Moscow State Institute of International Relations (MGIMO) underscored the importance of academic and cultural exchanges in enhancing the diplomatic relationship between Russia and ASEAN.

In May 2018, in an historic event, NEU signed a Memorandum of Understanding for academic collaboration with MGIMO that “hopes to enrich the intellectual environment of both institution”.  Dr. Julian Meimban, Vice President for Research of NEU, and Dr. Anatoly Torkunov, Rector of MGIMO, represented the two institutions. The historic signing which took place at MGIMO campus in Moscow, Russia was witnessed by (former) Secretary Cayetano and (former) Chief Presidential Legal Counsel, Salvador Panelo. To reciprocate the NEU visit, Russian delegates, led by Dr. Viktor Sumsky of MGIMO visited NEU in September 2018.  Dr. Sumsky delivered a presentation in a forum on the Cold War, and conducted exploratory talks regarding the offering of Russian Language program in NEU, and other joint endeavors in the field of Information Technology.  For its part, NEU conducted a study of social distance between Russians and Filipinos, as perceived by residents in Quezon City.  The findings of the study would serve as a sounding board for both countries for future joint programs.