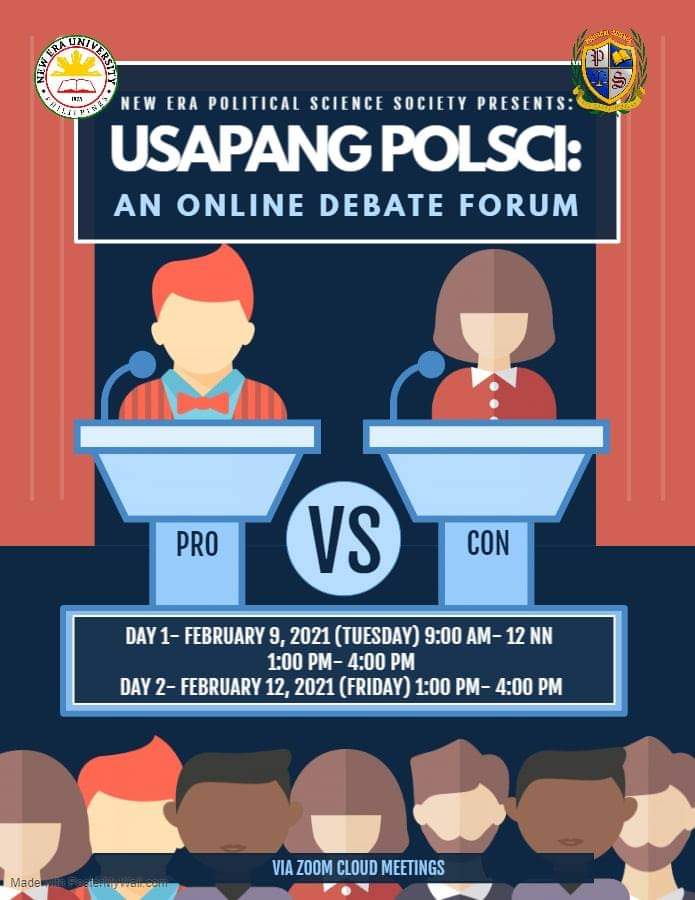 The New Era University Political Science Society conducted its first online debate on February 9 and 12. The event dubbed as, “USAPANG POLSCI: An Online Debate Forum” was participated in by selected BA Political Science students who showcased their research and debating skills.

Each debate team was composed of four members. In every turn, each speaker was given four minutes to deliver their speech and two minutes for the cross examine by their opponent. Prof. Belinda Marzan, coordinator of the Political Science program, noted during the pre-debate conference the importance of understanding the parameters of the debate to be able to come up with a good arguments, especially with the limited time the students have.

The two-day event started on February 9 for the elimination round. The first and second teams stood for the affirmative and negative sides, respectively, on the first proposition, “Resolve that House Bill 7137 be passed making Marcos Day a national holiday,” where the negative side won the discussion. In the second half of the elimination round, another set of contenders debated on the proposition, “Whether or not tourism be intensified for economic development despite the current pandemic,” which the negative side successfully defended. The two winning groups became the official qualifiers for the second and final round on February 12.

During the final round, the team for the negative side bagged the championship for the the proposition, “Whether or not the labor force be the priority recipient of the COVID vaccine.“ The winning team was composed of Ayhee Marie David, Prince Jaymie Limonero, Joahna Daproza, and Junnel Noces. “Humbleness, dedication, sportsmanship together with prayers, are what I think led my group to triumph,” Limonero said.

Comprising the panel of judges were two professors, Dr. Joseph Asuncion and Prof. Lilibeth Cruz, and two alumnae, Ms. Kate Lapira, and Ms. Chelsea Parreño. The winners were awarded certificates of recognition while certificate of participation was given to all participants for actively joining the event.