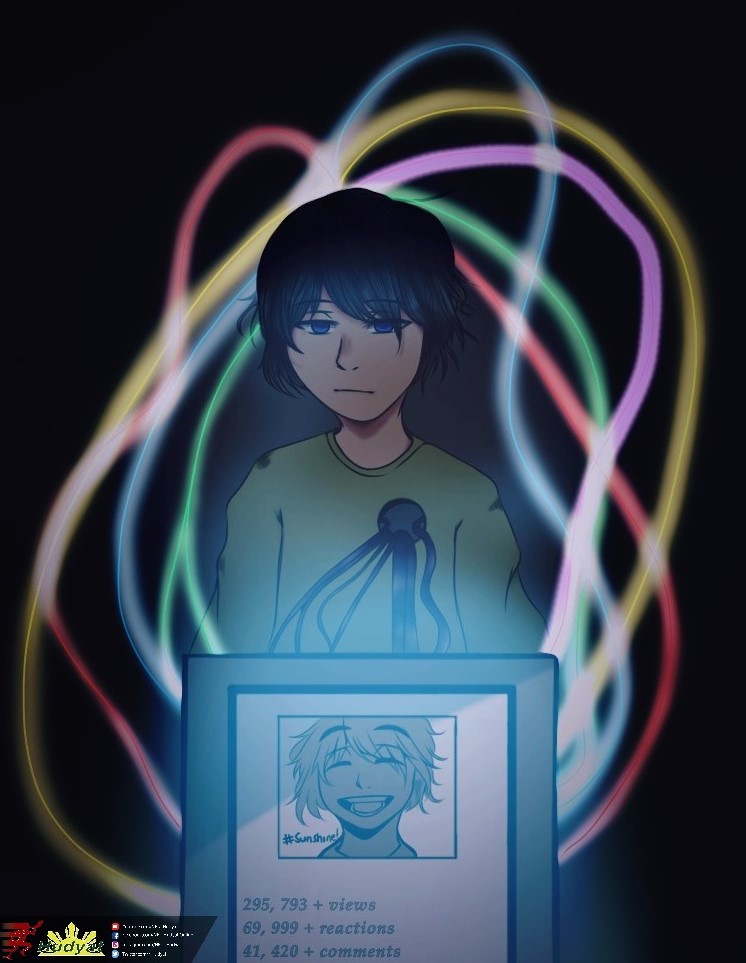 By Eric Gabriel M. Along

JOHN CAME HOME from a tiring day in school, but he was relieved to see his so-called “friends” talking and waiting outside his house. He seldom talks to most of them, but he knows his “friends” by face and, most importantly, they make him famous. John went to the kitchen to find something to eat. After preparing his Korean samyang and tea, he excitedly took a photo of his trendy snack, posted the picture on his gate, and rushed to the windows to see his “friends” react. And they did! His friends screamed shout-outs, liked his photo, and commented on how woke he truly is. John, gratified by the response of his “friends,” finally remembered his hunger and ate his snack.

He could hear his friends and followers clamor in front of his house. “Well, that’s the sound of fame,” he imagined with a smile. But a distressing thought haunted his mind—his classmate Billy whom he caught talking ill against him. John left his lukewarm soup to craft a menacing message to destroy Billy—that fake, backstabbing, good-for-nothing Billy—in front of the world. Of course, he did not name Billy or even talk to him first about it. Turning him into a blind item will generate more excitement for his “friends.” Alas, as soon as his flaming words were on the gate, his “friends” were all ablaze with anger and their much-important personal judgments.

John looked at his window with a sense of victory. Now that his followers scream for more, he can now post a glorious selfie matched with his beach photo from a week ago. Hundreds now engage at his gate, feasting on his memories, opinions, and family pictures throughout the years. What joy, what success!

John seems familiar—too familiar, perhaps—because he is a metaphor to what we see on social media. But the youths who are guilty of this consider comments against their behavior as mere flak from the older generations. Psychology and statistics say otherwise. Researchers from the University of California, Los Angeles concluded that teenagers find pleasure and validation in how many likes and comments they receive online.

Driven by brain development and peer pressure, they are compelled to commit risky acts. Even some adults find themselves among the victims of fame obsession. Hundreds fall off from cliffs and skyscrapers for fatal selfies. An Indian man was mauled by a wild bear after taking a selfie with it on his way home. For the sake of social media frenzy, some drenched themselves on flammable liquid and set themselves on fire. More than 80 teenagers died from eating detergent balls in the Tide Pods Challenge trend.

Dr. Jean Twenge and Dr. W. Keith Campbell, two respected psychologists, argue that there is an “epidemic of narcissism.” In fact, according to the 2019 study by Computers in Human Behavior, posting many selfies online is directly linked to excessive self-love. Similar research by Swansea University and Milan University states that social media users “may be at risk of developing such narcissistic traits [grandiose exhibitionism, beliefs relating to entitlement, and exploiting others] associated with their excessive social media use.”

The Journal of Abnormal Psychology reports that the rates of depression among teenagers between ages 14 to 17 had increased by more than 60% between 2009 and 2017. The cases of suicide and suicidal thoughts among young people doubled as well. Suicide rates are now almost as high as the statistics during the Great Depression and World War II. What is the leading culprit? Dr. Jean Twenge points the blame to “the growth of smartphones and digital media like social media, texting, and gaming.”

Moreover, with a few strokes and clicks, one can mislead thousands to believe false information and toxic ideologies. In turn, nations are plagued with confusion, racism, and fallacies. Gossip and fake news can instigate scandals and ruin reputations. Worse, a ten-year-old child with a personal phone and social media has access to pornography and the dangers lurking on the Internet. Social media is addictive, making these facts even more terrifying. Out of the 3.1 billion social media users worldwide, 210 million are estimated to suffer from Internet and social media addiction. Teenagers can spend two to nine hours on social media, and symptoms of depression are directly linked to how long a teenager spends on these sites.

However, it is unfair to paint social media as an abysmal hellscape. These sites allow families and friends to talk to one another no matter how far they may be. Some even use them to find the love of their lives and reunite with long-lost relatives. Social media serve as a platform for amazing talents and humanitarian works. For many people, these provide a way out of poverty and a front for truth and democracy. Amid widespread gloom and guile, social media provide hope.

Social media is the unfortunate irony of modern life. It can foster love and change lives for the better, but it can also be a battleground for ruined families, friendships, and sectors of society. Many can sing and dance their way to fame online, yet many users still find their dreams shattered by a wrong post. While billions of people scroll through jolly content on these sites, millions fall into addiction, depression, and vanity.

Social media is here to stay. Memes, selfies, rants, and online whatnots will remain to fill our lives. These sites had dominated the previous decade; the generations after us will grow up with these platforms as well. No matter how twisted and antisocial social media can be, always remember this: A beautiful life does not rest on getting likes, winning debates on comment sections, and comparing yourself with others based on fame. You are not a mere hyperlink in a noisy online world. You are a unique person—go ahead and pursue your deepest dreams and meaning.

Mentally fit to stay on track

We are Almost There

Climate crisis worsens as countries fight to save their economies