“Father of the Bride” 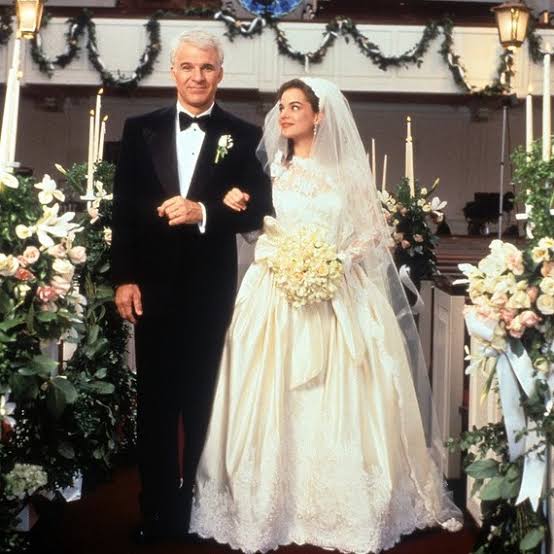 Father of the Bride” is an American comedy film about a man trying to sink in all the preparations for his daughter’s upcoming wedding. The father is unready yet to face the truth that his little girl is now a woman, hence, he ends up getting into a world full of trouble as the wedding slowly approaches.

This film is directed by Charles Shyer, an American film director, producer and scriptwriter who creates films predominantly comedies, and often with a romantic-comedy overtone. Casting the movies are famous stars including Steve Martin as George Banks; Diane Keaton as Nina, Steve’s wife; and Kimberly Williams as Annie, the daughter. Annie’s future husband, Bryan MacKenzie, is played by George Newbern. The wedding planner and designer, Franck Eggelhoffer, is powerfully portrayed by Martin Short.

The story starts with George’s 22-year-old daughter who has decided to marry a man from the upper-class family and told her family that she was engaged with Bryan when he returned from Europe. This news was a big shock and a surprise to her parents, especially her father, George. It seemed like George doesn’t like to hear the news that it eventually resulted in an argument between him and his daughter. As time passed by, the Banks family finally met Bryan as well as his parents, John and Joanna MacKenzie. George’s wife, Nina accepted Bryan as a potential son-in-law and kept on persuading her husband to accept the young man as well.

As the wedding nearly approached, there were lots of preparations. George had been trying to cope with his struggle in accepting the fact that her lady was about to get married soon. Among the most exciting parts of the story were the troubles and hindrances that George would be facing before the wedding and what might happen during the preparations as conspired by the wedding planner and designer.

I find the movie perfect as a family film. Despite its slow-paced flow, the film’s impact on the viewers is remarkable as the affection and emotions were powerfully portrayed by the actors and actresses. Aside from the superb performance of the cast, the technical elements of the film were also imposing. I was truly impressed with the cinematography and was entertained by the sound effect employed in the film. I would say, watching this film is definitely worth your time.